Jackie Christiansen wants Summit County to be a healthier place. As director of operations of Starting Hearts — and now the Summit County project director — she is focused on expending what was solely an Eagle County nonprofit to one that now has a local foothold with a Frisco office.

“I live in Dillon, and before COVID, I was traveling to Avon about three days a week,” Christiansen said. “That’s a long drive.”

Christiansen has been with the nonprofit since 2019. Her background is in international marketing, but she was a certified nutritionist and personal trainer when she first moved to the area in 2007.

“My heart is really helping people with their health,” she said.

The small office opened in February and doesn’t provide a lot of space for CPR or automated external defibrillator education courses due to social distancing. But what it does provide is an opportunity for Christiansen to be more active in the community and raise awareness about sudden cardiac arrest, which she called the No. 1 preventable cause of death in America. 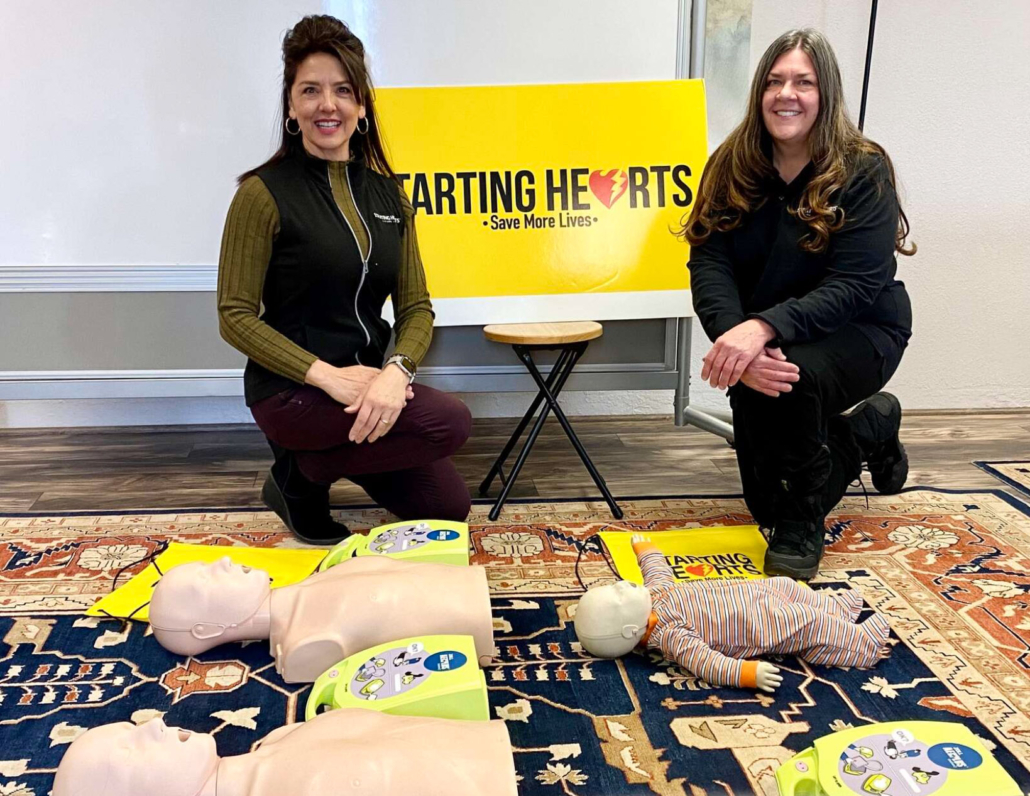 Christiansen said the education is important in the High Country since there are frequently visitors from lower elevations who put themselves at risk with strenuous activities such as skiing and snowboarding.

A key for survival is early intervention. Christiansen said the national average response time for emergency medical services is about seven minutes. In four minutes, brain damage can start to occur, she said.

“If we can have an early response time by having someone call 911, someone starting chest compressions and someone else grabbing an AED and get to that cardiac arrest victim within the first three minutes, the chance for survival is 70%,” Christiansen said. “It declines 10% every minute thereafter.”

Access to a public AED is a factor in that scenario, and Starting Hearts has a goal of one defibrillator per 100 people. There are currently 205 AEDs in Summit County, according to the organization’s audit made possible by a grant from BGV Gives, the philanthropic arm of Breckenridge Grand Vacations.

Over the past five years, BGV Gives has raised nearly $820,000 during its annual Rob Millisor Heart Health Walk. More than $500,000 of that has been allocated to support various heart health programs and projects.

“BGV is really setting the example in Breckenridge,” Christiansen said.

According to BGV Gives Program Manager Deb Edwards, there has been $77,500 in grant funding provided to Starting Hearts since 2017. On top of that, $17,666 has gone toward AED purchases and maintenance.

“(Heart health) is near and dear to our hearts because of what happened to Rob,” Edwards said about the co-founder of Breckenridge Grand Vacations who died of a heart attack in 2015 at age 51. “We clearly are not experts in this field, but we are passionate about supporting efforts to make our community safer with more people to provide CPR and more people who are aware of AEDs.”

Christiansen said a single AED retails for about $1,300, and she has a goal to purchase 20 in the first half of the year and 20 in the second half. The Frisco office also employs Katy Boothby — who set up BGV’s AED program — as program technician and CPR instructor. Boothby’s duties include remotely monitoring the devices and replacing equipment like batteries and shock pads.

But simply having AEDs isn’t enough, as people need to be educated on how to use them. Starting Hearts wants to get 50% of the Summit County population trained in three years. To do so, the organization offers two types of in-person and virtual classes: its own 45-minute Call.Push.Shock class and a longer, three-hour class with the American Red Cross. Christiansen said the valuable knowledge can save lives, especially if bystanders don’t want to get involved for fear of doing something wrong.

“Even with my background in health and wellness, I didn’t know those public AEDs were for public use,” Christiansen said. “I thought they were for emergency responders. I had no idea.”

Once trained, the public is encouraged to sign up for Starting Hearts’ Neighbor Save program. Using a mobile app, anyone certified within a half-mile of a sudden cardiac arrest will be notified so that they can help. The program is online only in Eagle County and will take time to implement locally.

Thanks to a grant from BGV Gives, Eagle County nonprofit Starting Hearts will provide life-saving educational courses and training locally to teach people how to respond to sudden cardiac arrest. Defibrillators also will be placed in highly trafficked areas in Summit County.

The grant is a continuation of BGV Gives’ support for heart safety in the community. The philanthropic arm of Breckenridge Grand Vacations donated to Starting Hearts in December, and BGV Gives implemented a defibrillator audit and inspection in Summit County in September.