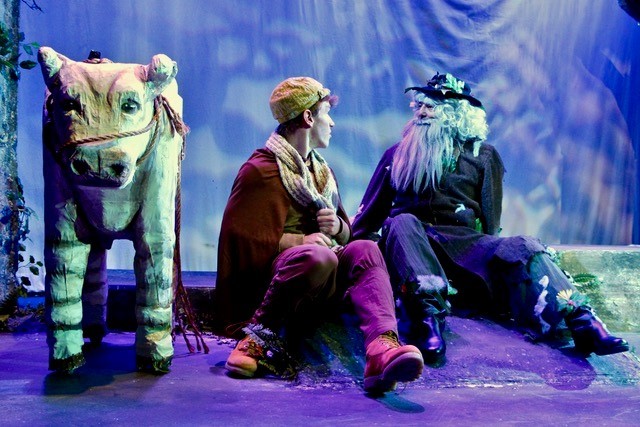 People don’t often associate “community theatre” with professional-quality performances like you’d see (for a lot more money) in a big city.  However, Backstage Theatre in Breckenridge isn’t your average community theater.  “The community element really involves who we serve – we’re here to serve the community of Breckenridge.  If that means bringing in actors from the outside to do the best show possible, that’s what we do,” said Nathan Autrey, Artistic Director at Backstage Theatre.  With paid actors who are carefully selected by Autrey, these performances are designed to wow audiences in the intimate 137-seat theater, where there’s not a bad seat in the house. “You have this feeling like you’re participating,” said Debbie Trevino, Executive Director of the Backstage Theatre. “You’re so close to the stage, not like when you’re at a huge theater and you’re 50 rows back. The experience here is very engaging and interactive.”

Both Autrey and Trevino joined the Backstage Theatre in 2018, combining their theatre and business experience to create a grand vision for the organization that includes making the theater performances as world-class as the town’s outdoor recreation options.  “We want to make sure people are having a great experience, from the moment they walk through the door to the finale of the show” Trevino said.

That experience is also highlighting Breckenridge, the destination.  The beautiful lobby and bar, which was renovated by the Town of Breckenridge a couple of years ago, now serves all Breckenridge Distillery spirits and Broken Compass Brewing beers.  “When visitors come to town, maybe they didn’t have time to fit everything into their vacation,” Trevino said. “We offer these local products so they can get that local experience.  It has really elevated the happy hour before the show.”

This summer’s shows include:

Into the Woods – this Broadway Musical is a crowd favorite and with its adult humor gives a modern twist on several of the beloved Brothers Grimm fairy tales.  Showing through August 11, Wednesday – Sunday evenings.

Totally Red! – this children’s theatre production is performed by adult actors for the entertainment of children.  This is a unique and fun retelling of the classic battle of wit and deception as told in the fairytale of Little Red Riding Hood.  Showing through August 10, Thursday, Friday and Saturday matinees only at 10:00 am.

Little Shop of Horrors – the much-anticipated annual locals show performed at the Riverwalk Center. This hilarious musical tells the story of a meek flower shop assistant, Seymour; who pines for his coworker, Audrey.  He discovers an unusual plant which feeds only on human flesh and blood and after it feeds on Audrey’s boyfriend, he must come up with more bodies for the increasingly bloodthirsty plant. Showing August 23 – September 1.  (No performances on August 26 and 27.)

Sweeney Todd – for the first time, Backstage will be having a show in October!  Sweeney Todd: Demon Barber of Fleet Street is the perfect musical to get you ready for Halloween.  The show will be coupled with an “Old London Haunted House” in the lobby.  Showing October 3 – 27.

For showtimes and tickets visit backstagetheatre.org.